THANK YOU ALL for participating in this most excellent CFFC #9! Unlike the astronaut, the last thing we want is for this amazing trend of participation to stop ((Very smooth Si.)). Y'all are awesome and we are super happy to be judging a competition with actual entries that we didn't write (optimist, that's me!). 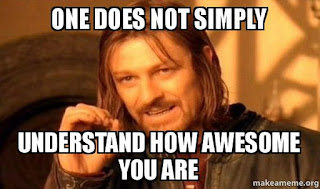 And now, with no further hilarious and distracting memes, let us continue to THE AWARDS OF DOOM.

Si: Ha! Great twist! Love the way the story leads readers done one particular path (WHAT IS SON DOING?!), the way the truth isn’t revealed until the verrrry last line, the natural dialogue between the parents. Some of the lines exchanged are particularly great: “Healthy? I wouldn’t call anything he’s doing back there healthy.”, “Sometimes you like those strange urges.” I would have liked a bit more tension as the piece progressed, as for such a short writing form, the conversation is a bit drawn out. Poor George! This is a great, funny, light piece. Great story!

Rin: I have to admit, I was worried where you were going with this, given what it sounded like you were suggesting the boy was up to, but that last line had me laughing. It was a good twist, but I do warn(any participant) against suggestive phrasing in the future as that is something that at least 2 of our 3 judges dislike seeing in an entry. However, the dialogue was amusing, capturing the feel of a married couple's light banter well, and I liked the characters, especially George. My favorite bit is '“Healthy? I wouldn’t call anything he’s doing back there healthy.”' because now that I know what he's complaining about in context, I have to feel for him, having listened to not-so-good young musicians play myself. Those guitars can be painful in the hands of an inexperienced player. All around, it was a fun story.

Si: Beautiful, haunting piece. I love the way it starts with the siren--foreshadowing, but not so much that we know what’s coming. Bit by bit the setting gets revealed--which I understand as the landing of one of the atom bombs on Japan, based on the clues in the story, though it could also be a futuristic setting. The twist where the orange glow appears--sunlight, Chiyoko thinks, and then becomes something much worse--is very well done. The ending. The juxtaposition of the man in the plane and the destruction below is very poignant. The part with Little Boy is a bit confusing, I’m not entirely sure what’s happening--I did like the phrasing “whispered Little Boy sadly as he sent forth his killing wind. ” a lot. Well done!

Rin: This story pulls you right in with thick with good description, tension, and a feeling of inevitable doom just around the corner. I loved the nudges to history contained in it, but I agree with Si that the 'Little Boy' part was a bit confusing. Who was Little Boy? The bomb? The pilot? My favorite line was 'She was already running from this world to the next even as she scrambled back into the shelter, hurtling down steps that dissolved with every movement, carrying her terror and innocence with her.' because it paints a clear image in my mind of what she was experiencing and was a beautiful bit of description. The last paragraph probably shouldn't have begun with 'And', grammatically speaking, but aside from that, it wrapped up the story neatly, giving a feel of desolation and weightiness. Great job!

And, without further ado, the moment you've all been waiting for--

Si: Yes! I love the tension and the immediate start to the story. No info-dump, no explanation, but it’s not needed, we jump RIGHT into the action. I like the desperation in the characters (excellently shown by “Can you climb up to the roof? Write 'HELP' on it with kindling sticks?”. Great dialogue! Excellent tension for such a short piece. I love the idea of animals suddenly going crazy/attacking humans for seemingly no reason. I want to know more about this situation--is this an animal zombie apocalypse? Have the animals just had enough? Are they fleeing from something worse? I WANT TO KNOW. Awesome, fun, and fast-paced story!

Rin: I loved the description in this piece. My favorite line was 'They'd awoken to sudden, deep snow. A last few leaves had fallen atop the drifts, leaving red-orange puddles on the white forest floor, like too-fresh blood.' A great piece of imagery! The pace was swift and kept the story moving along smoothly. I enjoyed the way that this has been broken up like chapters, giving it a more 'full story' feel. The only thing that I would have suggested to change is the line 'Jeb sighed. “They're already hibernating,” and sat up dizzily. “Any food left?”' because it is grammatically incorrect. The first bit of dialogue should have ended with a period and the next sentence started with 'He' or the comma stays and be followed by 'he said,…'. Aside from that, it was a great story!

“I hate it. I wish it would stop.” Sarah watched through a chink in the second-floor shutters. They'd barricaded the stairs. “Goats climb, right?”

On the bed, her guide, Jeb, opened his eyes with effort. Smeared blood had glued his lashes together. “Yeah.” The deer attack had left him woozy and weak.

“We're surrounded. Deer, raccoons... a wolverine?” She wondered if they could climb the cabin's exterior walls.

“They can't climb up to the second story.”

Jeb sighed. “They're already hibernating,” and sat up dizzily. “Any food left?”

“Just a SlimJim and a banana.” She turned to him. “How are we gonna get out of this alive?”

“Someone will come looking,” he said. Both doubted that.

They'd awoken to sudden, deep snow. A last few leaves had fallen atop the drifts, leaving red-orange puddles on the white forest floor, like too-fresh blood.

He'd opened the SUV's hood to find an incinerated raccoon. It had chewed through the battery cable.

The animals had chased them back inside.

He said, “I shouldn't have left the buck strapped to the roof overnight.”

She shivered, “What are we gonna do?”

“Can you climb up to the roof? Write 'HELP' on it with kindling sticks?”

“We're miles from nowhere and there's another storm coming in.”

Sarah climbed out the window onto the porch roof, then climbed up on to the main roof. Jeb handed sticks up to her. She was halfway through E when a distant rushing sound caught her ear. The black tree branches swayed at their tips, swarming from every direction, a furry, terrifying rumor approaching all around them.

Amazing stories all! Be sure to tune in next time for another EPIC round of CFFC!

Who knows what strange youtube video (has Mars shown you guys Yeah Toast! yet? DON'T REMIND HER.) or highly amusing meme will pop up next? Tune in on Saturday to find out! Until then...

*Si and Rin are snatched away, screaming, as Flavio the Death Moth darts in from overhead*

*in the distance, an insane moth flies into the sunset*
Posted by Unknown at 2:00 PM