It wasn’t easy to judge this week’s fabulous entries. I read and reread, loving all the twists brought on by the prompt.


Finally, I knew which ones resonated with me. And why.


Announcement: Cracked Flash Fiction Competition is taking a hiatus for the holidays and will return for week 21 on the 7th of January 2017.

Carin Marais with “The Sewer Rat”

The revenge-element along with facades – obvious and metaphorical – made this a great read. I grinned with glee at the end. Note: either indent paragraphs or leave a line open. Also, “gold leaf” and “voice box”.

Angie with "My Abuse Kit"

So often the abuse on women is overlooked or brushed off as nothing. Loved the ending where the character had left her abuser and went on with her life.

Note: use paragraphs; start a new idea in a new paragraph; leave lines open between paragraphs. Use a colon after “ultimate truth” to emphasise that he didn’t like what he’d created. And a semi-colon between the sentences “I never lied about it; I simply omitted…” to bind those thoughts closer together. Also, don’t use capital letters after colons. Great read.

Kelly Griffiths with "The Prettiest"


“Sometimes it’s better to hide the unsightly with shiny things than to try to fix it,” said the mother. “Grab that box of Christmas tinsel from the attic. And a fork.”

The child’s noisy rifling through the silver drawer induced a clamorous tune, followed by staccato thudding on the attic stairs. She returned breathless, holding a fork in one hand, a dusty red box in the other.

The mother took the bright silver lengths and held them to the light. The tinsels flashed and shimmered, squirming in her arms like a lightning strike. She gravely handed the tinsel to the child. “You do the honors. It’s your first time.”

The child wrapped the silver noodles around her fork and jammed it in an eye socket.

“Yes, that’s it,” counseled the mother, “Now hold the tinsel down with your fingers and gently slide the fork out. Now the next one. We can stuff her mouth with dryer sheets soaked in cinnamon oil, so she doesn’t stink. Grab the red sequins and we’ll sew her mouth closed, but we’ll leave slits like a sachet. See?” The mother beamed with pride as her daughter bent to the work, eyebrows furrowed in concentration.

“Yes, like that. Sew her mouth into a smile. You just have to pull hard on the thread. She can’t feel anything.”

“I think I hear her crying,” the child protested. See, where she’s coming apart?”

“Just use more tinsel. Wrap it like a necklace and no one will know her throat is cut.”

The child obeyed, her eyes widening at the transformation. A slight smile played at the corners of her tiny mouth.

“This is the prettiest Christmas doll ever, Mommy.”

“Almost as pretty as you,” murmured the zombie. 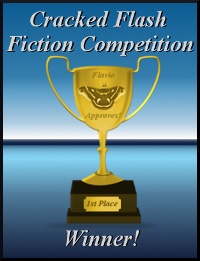 Thank you all for your participation! Until January…