Si was highly amused by all your entries this week.

And without further ado, THE WINNERS!

Sometimes the dumbest assassin is actually brilliant in its stupidity! I loved the dichotomy between the main character's reaction and Marcy's reaction to the assassin. Serious threat, or ridiculous joke? I would have liked a bit more description of the character's expressions--I imagine Marcy was frowning, pissed off--and some information on who they were talking to. I like how the reason for calling the assassin dumb is first the ridiculous appearance of the assassin--but later, the fact that the assassin signs his name to the weapon! And who is it but Dr. Horrible! Great job keeping a balance between dialogue and description, and presenting two very different characters with a common goal. I want to know what happens next!

Cat assassins! I really like the tone of this story and the way you give the cat main character a distinct accent. Great job telling us just enough about Al's previous and current personalities--and the cats' predicament. It moves the story's tone from humorous to grim--the cats don't want to off poor Al, but given the choices--! Great last line, it fits perfectly. I would like to see more dialogue between the cats before the story heads to reminiscing about what Al used to be like. But here you do an excellent job balancing what details to tell and what to let the readers imagine. Your transitions work very well from recent events, to past memories, to reflection on what the situation is now. Well done!

This was hilarious. I love that you don't outright tell us the main characters are a bunch of aliens. Funny: "it’s stupid to disguise yourself as something that doesn’t even exist on that planet." I liked the way the story of what happened comes out from the dialogue of various (nervous) aliens explaining their mistake to Captain Buskle. Great show-not-tell. The reference to the alien bachelorette party gone awry, this line "“So, you believe the sudden appearance of a frantic elephant at a presidential speech was preferable to a mutated mouse?” ", and the final shape choice of the Captain all amused me greatly. As a reader, I felt sympathy for the poor Officer Anabub who clearly made a terrible mistake. I also liked how the alien's logic attempted to make sense of Earth logic but got it horribly wrong. Excellent story!

Captain Buskle turned all of his eight magenta-coloured eyestalks to peer down on the Lieutenant.

“Lieutenant, that dumb assassin you refer to was the granddaughter of one of our Elders. I believe that she accidentally navigated to Earth during a wayward bachelorette party and that her intention was not to assassinate anybody.”

“Why couldn’t Officer Anabub think of something less ridiculous to shape-shift into?”

“It was a tactical ploy, Captain,” replied Fribble. A nervous musky odour began to dribble out of his face gills.

Captain Buskle’s eyestalks grew upwards another few inches and he glared at the Lieutenant.

“Humans all know that elephants are afraid of mice, so it seemed logical that an elephant would react and sit on the creature,” said Fribble.

“I thought you said she hadn’t changed into an Earth creature?”

“Yes and no. Maybe the alcohol interfered with her knowledge of Earth creatures. She resembled a mouse with the tail and the ears, but according to Officer Anabub, she had four heads and was the size of a badger,” explained Fribble.

“So, you believe the sudden appearance of a frantic elephant at a presidential speech was preferable to a mutated mouse?” asked the Captain, his eyes turning a darker shade of red.

“And how exactly did the officer imagine a marginally over-sized and disfigured rodent would assassinate anybody?”

Suddenly shape-shifting into a giant mouse, Captain Buskle towered over Fribble and hissed, 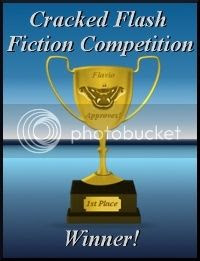 Join us this Saturday for another sleeplessness-fuelled, slightly mad flash fiction competition! Si out *swirls black cloak and vanishes in a puff of purple smoke*