I was shocked when I came to check on the entries and was told there were twenty! Turns out that there were really only ten and the rest were responses from other participants. It would have been awesome to have twenty entries, but hey, we love to see interaction between y'all in the comments section too! Y'all are great!

This was pure fun! Good tension all the way through, relieved in short bursts with their preoccupation on the questionable sparkliness of his suit. The character’s felt whole and the dialogue felt natural. My favorite line was “It appears the man responsible for the accident was found near his car, cuffed to a sign post. He told the police that a man in a sparkly blue suit had stopped the car with his bare hands.” It made me laugh and I like how it twisted around to him actually not pretending. Thanks for the amusing story!

Nancy Chenier with Back on Track

There was so much I enjoyed about this story. All the little descriptions set us firmly in the setting and made it easy to visualize. The way the prompt was used. Every detail— the resemblance to the teaching assistant, the vertigo, the mentions of paradoxes and getting knifed twice before, etc— all pointing to what was going on, but keeping the reader guessing until the end to know who the characters were and what was really happening. The characters both felt distinct and I liked how it all felt awkward to the pov character, stepping back in time like that. My favorite line was ‘Screams— metal and human— settle with the concrete dust.’ I could just hear it! Very good description. Great job!

This one was just so jam packed with tension. The dialogue was done excellently, full of authenticity that made the characters come alive and conflict that made the story engaging. The pace kept moving right along and the two characters were clearly distinct from one another. I can’t express how much I loved how the whole story is a behind-the-scene alternative twist(or is it?) on the real life Granville-Paris accident, including the name of the woman who’d been killed by it, which spurred me to look it up. I learned something new, which is always awesome. Very clever. Excellent job!

Excerpt of the official inquest into the death of Marie-Augustine Aguillard, the sole fatality in the tragic events of October 22nd, 1895

"You have about ten seconds to explain why you pretended to..."

“What, sir? Know what I’m talking about? Are you suggesting that I am speaking through my hat? Do you doubt my words?”

“Yes, after a fashion. This inquest doesn’t have time for obfuscation. We have here a tragedy of epic proportion. Mr. Westinghouse has categorically stood behind his air brakes. To suggest for even a moment that his mechanism was in some way responsible for this human–caused accident is scandalous, sir.”

“I was there that day, sir, at the Gare Montparnasse Terminal, waiting for my wife who had been visiting family. We had travelled, in point of fact, to France specifically for her to reunite with cousins from her mother’s side of the family. They live in Mont Saint-Michel Bay. She had extended her stay and I was most anxious to see her. We had never been apart.”

“This does not make you an expert in train catastrophes. Not by a long shot, sir. You told the examining magistrate that, from your vantage point, the express was clearly travelling at…and I believe these were your exact words…”an irresponsibly fast clip but not so fast as to render reliable airbrakes inoperable.”

“My exact words. As for the accuracy of my statements, I have a brother who lives in Wilmerding, who once worked at Mr. Westinghouse’s Air Brake Factory, and who once let slip that a socialist contingent within the factory workforce were systematically sabotaging the product.”

“Slanderous gossip. Utter nonsense. We all regret the death of poor Mrs. Aguillard but it was an Act of God, if it was anything. To suggest that hard-working Americans had anything to do with the peculiarities of fate is shameful.”

“Which, I submit, is next to nothing.” 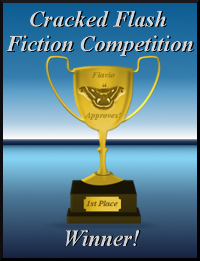 Join us again next week, as we welcome back the third member of our trio, Si, and bring back our two-judge format! Hope to see y'all then!