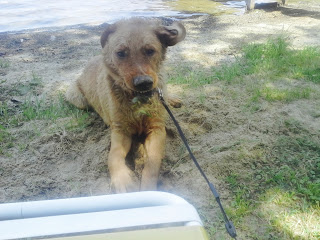 This week, there were a small amount of entries, but they were all absolutely amazing and I really had a hard time deciding how to rank them. The high quality, my indecision, and the presence of a puppy that is staying with me resulted in lots of procrastination and late results.

Overall, an intriguing piece! I was curious about who and what they were through the whole piece. It gave me just enough information for me to keep reading and what to know who those people were. It really inspired my curiosity. But I’m still curious. I’m still not sure I know who or what they are, which gives the feel of the beginning of something instead of a whole piece. I think even a few words could have changed that though. A few more breadcrumbs about their world and magic would have been wonderful.

Second Runner-Up
300 excavations later or CRAVEN (which was the title?) by Bill Engleson (@billmelaterplea)

I love how non-linear this piece was. It jumped around to different parts of the narrator's life, telling a complete story, without confusing me once. In some ways, it felt like too big a story for its size, leaving wanting a little more showing of the relationship instead of telling. Still, it was wonderfully executed, and managed to convey years of life and emotion in one small story.

First Runner-Up
Flower of the Ghosts by Carin Marais www.maraiscarin.wordpress.com

This piece was gorgeous! The language and descriptions painted a sad, beautiful and somewhat creepy images and told a complete story. Well done!

with Devil's got his tongue

This piece made me smile. The hints at the beginning, like the horns and the hunting, were perfect! The piqued my curiosity. The detail and backstory were well paced. The last line made me laugh out loud. Well done!

Devil's got his tongue

He found her at the base of a stone Angel, almost appearing to be part of it.
It had rained that night. Moisture hung in the air like gloom. It smelled of danger and evil. He hid his talons inside his long sleeved raincoat. His wild red eyes well hooded by his hat. It was always uncomfortable concealing his horns, but that night he didn't mind. He was on the prowl. If the prophecy was true then it was the night he'd find his mate.
Rain was now a slight drizzle as he sloshed through puddles on the cobbled street. The witch's words still rang in his ears-

"She will lie at the feet of an angel,
her heart as black as the night,
don't be fooled by her gentle beauty,
she can be a frightening sight."

He had come upon a stone Angel just round the corner of the street. He saw a figure slumped across the base of the statue. The grey clothes almost made it look a part of it.
He cleared his throat. The figure didn't move. Shuffling his feet uncomfortably he brought up the courage to put a hand on the figure and shake it gently.
"Are you okay?"
The figure rose with a jerk. Red eyes pierced into him.
"Better than you think," she rasped.
He stood there unsure.
How the hell does one woo his future wife, the Devil had no clue.